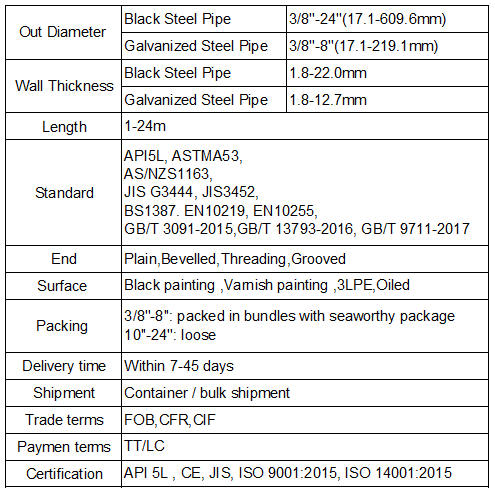 The company was founded in 1978. The current chairman, Chai Zhujin, led more than a dozen people to establish Tianjin Shuangjie Steel Pipe Plant in his hometown.

With the 40 years of hard work and entrepreneurship in reform and opening up, we have achieved outstanding results.

The company is located in Beichen District, Tianjin, adjacent to Beichen Economic Development Zone, 50 kilometers away from Tianjin New Port, and has a dedicated railway directly to the factory.

The company covers an area of more than 270,000 square meters, has more than 500 employees, about 30% of high and intermediate titles, and 76% of young and middle-aged employees. It is a dynamic and technologically rich experience in the production of welded pipes. Innovative production and R&D teams. The company has a technology research and development center and laboratory, advanced testing equipment and complete facilities.

At the beginning of the establishment of the factory, the company can only produce high-frequency welded pipes ewith the following specifications of Φ60. In order to expand the product specifications, scope and varieties, the company has built 5 welded pipes and galvanizing production lines for more than 30 years of production and operation. First, the customer-oriented business philosophy, adhere to the "integrity and compliance" business principles, we have a full range of products, advanced technology, quality and stability, so that "Shuangjie" steel pipe from 1985 to now all gas projects in Tianjin all use the company's products . At the same time, our products are also widely used in national key projects, in the expansion of the Great Hall of the People in Beijing, Beijing Zhongnanhai Conference Hall, Beijing Capital International Airport and CCTV New Building, National Stadium - Bird's Nest and other projects have been obtained by the construction side Highly recognized and praised. Our products have been exported to more than 30 countries and regions such as the United States, Canada, Europe, Australia, Central and South America, Africa and Asia for more than 20 years, and have become one of the major welded pipe export enterprises in China.

In 1999, the company invested more than 60 million yuan to build and develop the Φ325 straight seam high-frequency welded pipe production line, positioning the product on the oil and gas transmission line pipe. Its key equipment has introduced advanced intermediate frequency annealing equipment and electronic testing equipment from the United States and Japan to ensure the final quality and reliability of the products. It can be widely used in the oil and gas industry with an annual output of 120,000 tons. Due to the strict positioning of products and high technical starting point, in February 2003, the technical appraisal of scientific and technological innovation experts organized by Tianjin Economic Commission and Science and Technology Commission was passed.

In 2005, the company invested 400 million yuan to build a new “Φ630ERW high frequency welded pipe production line”. The project adopts advanced, mature and reliable welding technology and process equipment at home and abroad, and introduces the world's most advanced strip milling machine, FFX forming unit, high frequency welding device, welding extrusion equipment, weld heat treatment device, RFS milling. Key equipment such as sawing, online and offline ultrasonic testing equipment were introduced from the most advanced countries such as Austria, Japan, Germany, Norway and the United States. After its completion in 2007, our company's annual production capacity reached 700,000 tons, and became the first modernized and advanced 630ERW high-frequency welded pipe production line in our city. In February 2008, the project passed the technical appraisal of “New Product and New Technology” organized by Tianjin Economic Commission and the “Science and Technology Achievement” technical appraisal organized by Tianjin Science and Technology Commission; in December of the same year, it won the first prize of Municipal Technology Innovation.

Based on more than 40 years of experience in the pipe manufacturing industry, Shuangjie Steel Tube Co., Ltd. relies on continuous technological innovation, relies on a solid management foundation and a sound management system to create world-class products for customers, which has become a 21st century. The most competitive modern enterprise in the pipe industry. 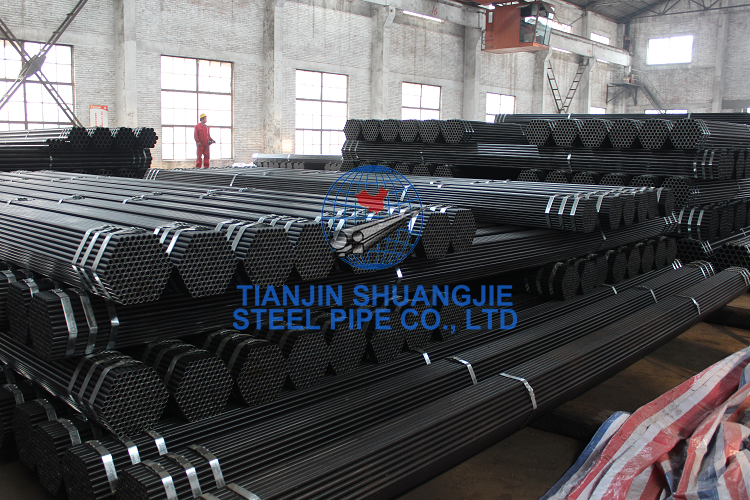 ◆   In July 1987, the trophy of “Gasification and Jincheng for the People” awarded by the Tianjin Municipal People’s Government

◆   In June 1998, it was awarded the “National Township Enterprise Export and Flying Dragon Award” by

◆   In January 2001, the 325 project was awarded the “First Prize of Excellent Technology Innovation Project” by the Tianjin Municipal People's Government.

◆   In September 2002, the “National Honest and Law-abiding Township Enterprise” issued by the Ministry of Agriculture of the People’s Republic of China

◆   In January 2003, it was awarded the “National Contract-Respecting and Credit-Reliable Enterprise” issued by the State Administration for Industry and Commerce.

◆   In February 2006, the “Shuangjie” trademark was awarded “Tianjin Famous Trademark" by Tianjin Administration for Industry and Commerce.

◆   In November 2006, it was awarded the “National Township Enterprise Implementation Going Out Strategic Advanced Enterprise” by the Ministry of Agriculture of the

◆   In January 2007, it was awarded the “Ten Best Private Export Enterprise in Tianjin” by the Tianjin Municipal People's Government.

◆   In January 2007, it was awarded the “Tianjin Key Cultivation and Development Export Brand” issued by Tianjin Municipal People's Government.

◆   In May 2007, it was awarded the “Tianjin May 1st Labor Award” by the Tianjin Federation of Trade Unions.

◆   In December 2007, the “Contract-honoring and Credit-keeping Unit” issued by the Tianjin Municipal People’s Government

◆   In December 2008, the 610 project was awarded the “First Prize of Excellent Technology Innovation Project” by the Tianjin Municipal People's Government.

◆   In February 2009, it was awarded the “National Iron and Steel Industry Advanced Collective” by the Ministry of Human Resources and Social Security.

◆   In September 2010, the “Tianshuang” trademark was awarded “Tianjin Famous Trademark” by Tianjin Administration for Industry and Commerce.

◆   In October 2012, it was awarded “Tianjin International Famous Brand” by the Foreign Trade Office of Tianjin Municipal People's Government.

◆   In December 2012, the “Shuangjie” trademark was awarded “China Famous Brand” by the State Administration for Industry and Commerce.

◆   In August 2007, obtained the A2 pressure pipe component manufacturing license.

◆   In September 2009,obtained  the A1 pressure pipe component manufacturing license

◆   In December 2013, the company obtained the JIS product certification from the Ministry of  Industry of Japan.

Since the establishment of our company in 1978, by adopting advanced equipment, relying on sci -tech progress and strengthening quality management, we have five High-frequency welding lines forΦ45、Φ60、Φ114、Φ325、Φ630 pipes and three hot galvanizing lines at present. Our main products are ERW black steel pipes and hot dipped galvanized steel pipes. Size of our round pipes range from DN10 mm to DN630 mm. The size length of square structural pipe ranges from180X180~500 X 500mm , side length of rectangular structural pipe ranges from 220 X 140~600 X 400mm.

As the High-frequency welded pipe is the leading product of our company, we always adhere to the principle of “quality first” and gain such honorary title as “National Excellent Product”, “Famous Brand of Tianjin”. Our welded pipes are widely used in the key projects in China and are sold in more than 20 countries and regions, such as the USA, Canada, Australia, Japan, the Gulf Regions and Hong Kong. We have become one of the leading exporters of welded pipes in China.

Q: How about the quality of products in your company?
A: We have high and best quality products and our products get some good feedbacks from clients all over the world. Once you got our products with some questions under guarantee, we will provide helps at first place. At the usual time, we keep our records about products complaints as low as 1% .
Q: Are you a manufacturer?
A: Yes , we are a manufacturer, not agent. We have own factory, which is located in TIANJIN,CHINA. We have a leading power in producing and exporting galvanized steel pipe etc. We promise that we are what you are looking for. Welcome to contact us.
Q: Is 3rd inspection on welded steel pipe acceptable?
A: Yes. BV, SGS are all acceptable.
Q: Do you attend any exhibition?
A: Yes. We attend exhibition in Asia, European, South America, Middle East every year.